Gilded Balloon at the Museum 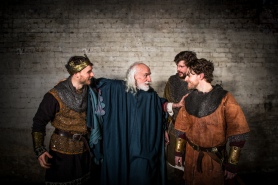 Story Pocket Theatre brings to the festival Michael Morpurgo’s adapted novel Arthur: High King of Britain. A drowning boy is rescued by a mysterious figure who claims to be Arthur Pendragon; as the old man tells his stories, he is transported back to the heady days of Camelot, the Round Table, Merlin, the Lady of the Lake, Excalibur, Lancelot and Guinevere.

This adaptation is a strong piece of storytelling; full of depth and quality. The production is sure to delight fans of all things Arthur as well as enticing new members along the way. Action is plentiful, with a number of exciting sword fights. The fully immersed cast and clever use of set design including a realistic puppet dog and sensitive costumes in keeping with the period all work seamlessly to hold the audience -whom were captivated throughout.

There is some fairly adult content to contend with – incest and adultery are not avoided but delicately handled. The emphasis is on traditional storytelling with a lot of dialogue which could have been difficult for younger audience members if the energy and clever use of set and song had not weaved through the piece in such harmony.

Story Pocket Theatre brings this well know story to a new crowd in an engaging and passionate drama for young and old alike. Romance, action and magic- what more could you want?!